Come check out the great photos of our UO WBB Alumni!
http://bit.ly/2020seniorsUOWBB

See how many players you can recognize.
(Hint they are basically in order by the decade they played.)

Want to check out some previous year's Alumni Days? This was an exciting game from the first minute to the last minute even though the Ducks took the lead early and stayed there!  Michigan State had been ranked 24th and were unbeaten coming into Matt Arena tonight but the UO WBB team kept at it and wrapped up the win with flare.

Here is a link to the game photos.  http://bit.ly/UOWBBvMSUpix

This is a public gallery.  PLEASE SHARE YOUR FAVORITE PHOTOS WITH YOUR FRIENDS!!!

Our team deserves to be shown off for their great work tonight.  It's time for the community to catch the spirit and come back to Matt Arena and cheer!  Can you help spread that word?

Have you been thinking about joining the UO Fast Break Club so you can enjoy this exciting UO WBB season with other like minded Duck fans?  Now is a great time to do it!

The new Fast Break Club white, long-sleeved shirts will be sold to FBC members in the Founder's Club immediately after the Chalk Talk before the 11/22 game against Michigan.

There won't be a lot of time between the end of the Chalk Talk and the beginning of the game so join the FBC online (click here) now so you qualify to purchase the new t-shirts on Tuesday!

The shirts cost $20 each and are only sold to FBC members. There's a wide range of sizes too. Sales will be CASH ONLY.  You can buy more than one. 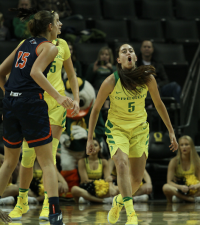 Maite was frustrated a few times during the game but by the end she had four assists to tie Ionescu for the team assists lead and seven of her own points on the board.

Some photo highlights are now posted for your to view and share with your friends:  Public link for album:   http://bit.ly/UOWBBvSanAntonioPIX

If the photo gallery gives you the impression that Sabrina Ionescu was all over the court, you're right.  "Ionescu led all scorers with 26 points on 9-of-14 shooting, including 5-of-7 from three-point range, after going 5-of-18 in the previous two games. She nearly had her second straight double-double, finishing with eight rebounds. " (GoDucks.com)

According to Coach Graves, the season gets real this coming Tuesday, November 22 when the Ducks host an unbeaten Michigan State of the Big Ten at 8 p.m.  There will be a CHALK TALK 50 minutes before the Michigan game that should be well worth your time! 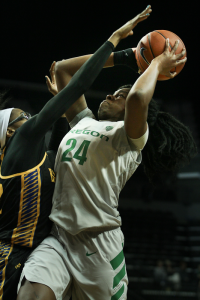 Great images of Ruthy Hebard's and Sabrina Ionescu's hot hands on both baskets and boards during the UO win over CSU Bakersfield tonight.  Great depth from the bench.  Let us know who your favorite players were tonight.  Check out the photo highlights below.

To get notification by email whenever new game photos or posted subscribe to our website updates -- BE SURE TO REPLY TO THE VERIFICATION EMAIL you'll receive to activate your subscription: http://bit.ly/subscribeUOFBC