FBC Home About Us Join! Events Travel Photos Board Contact Us
The WNBA draft is TODAY!!!
Photos to Remember the Highlights of the 2015-16 UO WBB Season!

UPDATE: Jillian traded to Connecticut Sun! Jillian Alleyne was picked in Round 2 by the Phoenix Mercury! 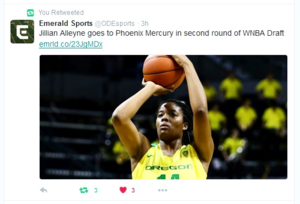 UPDATE 6/26/2016:  The Connecticut Sun announced today it has acquired rookie Courtney Williams and the draft rights to Jillian Alleyne, as well as a second round pick in the 2017 WNBA Draft in a trade that sends Kelsey Bone to the Phoenix Mercury.

Jillian will be joining the likes of Brittney Griner and Diana Taurasi in Phoenix!  Mercury GM Jim Pitman: “Jillian’s career at Oregon speaks for itself. … She’s someone who has first round talent."

We all knew that.  It's wonderful to see that her season-ending injury did not end her WNBA prospects.  There is no word for 'quit' in Alleyne's vocabulary and she will work just as hard at rehab as she would on the court.  That work ethic and can-do attitude will serve her well fitting into the Phoenix Mercury's game plans.

And from everyone at the UO Fast Break Club, "CONGRATULATIONS JILLIAN!"  We will love watching your career take off!