Come check out the great photos of our UO WBB Alumni!
http://bit.ly/2020seniorsUOWBB 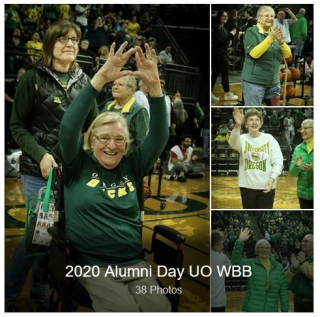 See how many players you can recognize.
(Hint they are basically in order by the decade they played.)

Want to check out some previous year's Alumni Days?

You hopefully all got a postcard and/or email.  Recap of the details is below.   This page will be updated if there are any updates.

This social is for FBC members.   Children of FBC members can attend free if they are under 18 years of age, if they are part of your RSVP. If you want to arrange to bring another guest who is not a 2017-18 FBC member, please contact Steve.  (They could sign-up for the club before or at the event)

So we can get estimates for catering, please give RSVPs by Sept 6 (Noon), to Steve Cordon:

Parking on the street around the Arena is usually free on Sundays, though double-check any meter you are at.  (parking map)

The Columbia Garage (under Matthew Knight) operates as an unattended Pay-To-Park on weekends. ($1 per hour)

There will be a No-Host bar, if you would like Beer or Wine ($7 each. Cash or credit cards accepted, but no American Express) 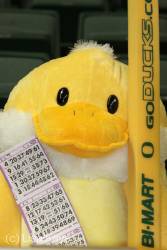 WOW !!! Thank you, Thank you, THANK YOU!!! to everyone who helped or bought bingo cards this year. While I don’t have all the records from way back, but I am pretty sure this was one of the best years ever!. FBC sold 18,532 bingo cards over 17 home games for an average of 1,090 per game. The high for the season was against UCLA with 1,958 cards sold. FBC bingo paid out a total of $8,490 to a total of 42 winners. The average pot was $499 with the maximum pot of $750 reached on 3 separate occasions. Best of all, the Fast Break Club netted $10,042 to support its programs, including continuing funding of the Teresa Smith Women’s Basketball Scholarship endowment. Again, thank you to all who support this fun fund raiser, and especially to those who help out with card sales, including Ane, Max, Ann, Terri, Chris T., Karen, Kris, Cambra, Steve, Michele, Chris B., Linda, Mike, Shirley, Diana, LaRosa, Troyleen, Mel, and Rachel.

Bingo sellers can get into the game for free, welcome lots of happy fans, and help support our Duck WBB.  They don't have to commit to selling every game.

Planning tips for the Spokane Regional 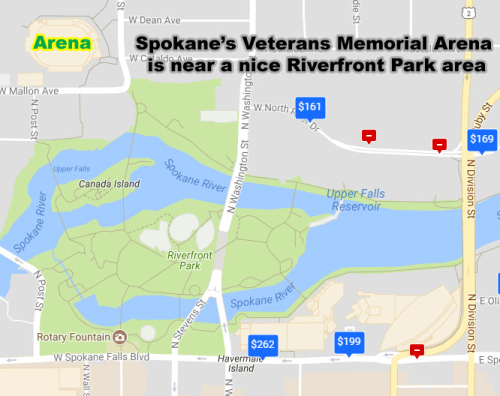 If our Ducks make it to the Sweet-16 or the Elite-8 (as we hope!) those games would be played in Spokane Arena (Veterans Memorial Arena). This is downtown, on the north side of I-90, just west of the Gonzaga University campus. There is nice walking nearby, around Riverfront Park which spans both sides of the river and an large island in the middle.

There are not a lot of hotels in the immediate, walkable area -- and those appear to be filling fast w/ prices rising.  (On my map above, you can see some Red markers where hotels were already full). You may prefer to drive from the hotel anyways, due to the time of day the games are played -- might be dark after the game.

The closest hotel is 0.4 miles (Hotel RL by Red Lion Spokane at the Park).   There are lots of hotels in the surrounding area, and you likely find a better option that is farther away.

For example, another fan recommended Residence Inn Spokane East Valley, if you're going up with another couple and wanted to be a little closer to the Idaho /scenery than downtown.  It is 12 miles away, but an easy drive out I-90.  They have 2-bedroom suites there, and are more affordable than downtown.

I suspect many of us will be driving to Spokane.

For those who haven’t been to this area, Idaho is only about 20 minutes by good freeway from Spokane, so you may want to check out some gorgeous country on the off day between rounds. 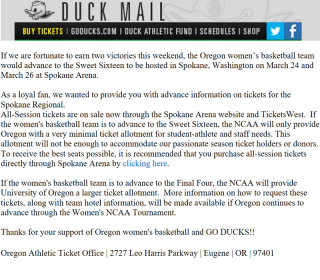 If you decide you can't make it this year:

Our Ducks have a challenging, but fair shot to make the Final Four.  If we do, we likely would have to get through a very tough Notre Dame team in the Elite-8 (#2 in the RPI, having played the nations toughest schedule with just 3 losses). 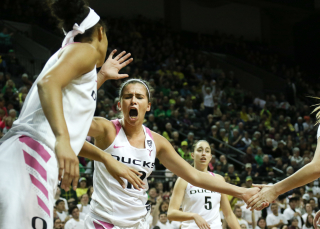 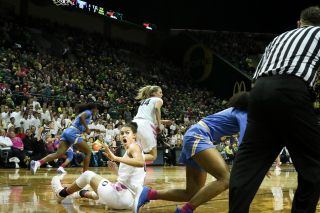 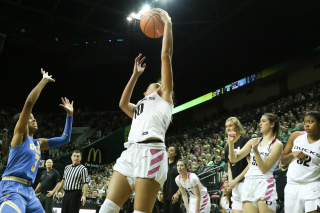 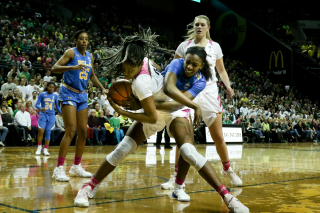