Oregon will meet Temple in the first round of the NCAA Tournament on Saturday in Durham, N.C.
Joe Waltasti
Release Date: 03/14/17 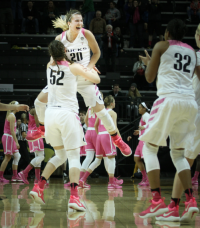 TV AND RADIO BROADCAST INFO
Oregon's game vs. Temple in the NCAA Tournament will be aired on ESPN2 at 3:30 PM PT. The game will also be broadcasted live on the radio in Eugene (KUGN 590 AM) and Portland (KBNP 1410 AM) with Terry Jonz on the call, Oregon women's basketball's longtime play-by-play man. Fans can find a free radio stream online via TuneIn.com/Ducks and the TuneIn app.

LAST TIME IN THE NCAA TOURNAMENT
The last time the Ducks made the NCAA Tournament was in the 2004-05 season. No. 10 seed Oregon defeated No. 7 seed TCU, 58-55, in Seattle in the first round behind Catherine Kraayeveld's 23 points. The Ducks lost, 69-46, to No. 2 seed Baylor in the second round.

KELLY GRAVES IN THE NCAA TOURNAMENT
In his third season at UO, this is Kelly Graves' first trip to the NCAA Tournament with the Ducks. However, he is hardly a stranger to the tournament.
- This is Graves' ninth trip in the NCAA Tournament.
- He first went to the NCAA Tournament as the head coach of Saint Mary's in 1998-99. Graves then went dancing seven more times at Gonzaga.
- Graves took Gonzaga to the Sweet 16 in three straight seasons - 2010, 2011 and 2012.
- In 2011, Graves and 'Zags advanced to the Elite 8. The No. 11 seed 'Zags were the lowest seed ever to reach the Elite 8. They defeated No. 10 seed Vanderbilt, No. 2 seed Xavier and No. 7 seed Louisville before falling to No. 1 seed Stanford in the regional finals.

IONESCU NAMED ESPNW'S FRESHMAN OF THE YEAR
After posting more triple-doubles than any freshman in NCAA history, guard Sabrina Ionescu has been named the ESPNW national freshman of the year, the outlet announced on March 9. Ionescu tallied four triple-double this year, tied for the third-most in NCAA single-season history and the most of any freshman. Only Stanford's Nicole Powell (5, 2020) and Youngstown State's Danielle Carson (6, 1986) have had more. Ionescu hit game-winning shots for the Ducks against both No. 20 California and No. 11 Washington this season as she averaged 14.3 points, 6.6 rebounds and 5.5 assists per game. Ionescu ranks 11th in the Pac-12 in scoring, 11th in rebounding and fourth in assists. She's also sixth in free throw percentage (81.9%), seventh in three-point percentage (41.6%), sixth in three-pointers made (2.21 per game), fourth in assist-to-turnover ratio (1.95), sixth in defensive rebounds (5.21 per game) and 10th in minutes played (31.17). In addition to her four triple-doubles, Ionescu posted seven double-doubles and was national player of the week after helping the Ducks defeat No. 15 UCLA and USC at home in the same weekend.

THE NEW TALL FIRS?
With six players standing 6-foot-3 or taller, the Ducks are tied with Kansas State and Texas for the tallest roster in Div. I women's basketball this season. Oregon's tallest player is 6-foot-6 freshman forward Lydia Giomi from West Seattle. She is the tallest player on the Oregon roster in 10 years (Jessie Shetters, 6-foot-6, 2003-07).

TOP-25 TESTED
Oregon has played a whopping 13 games against top-25 teams this season. The Ducks are 4-9 in those contests with wins against then-No. 24 Michigan State, then-No. 20 California, then-No. 15 UCLA and then-No. 11 Washington.

PAC-12 TOURNAMENT RECAP
Oregon went into the Pac-12 Tournament looking to bolster its NCAA Tournament resume and the Ducks did just that.
- Oregon opened the tournament with a 70-63 win over Arizona. The Ducks exploded for 29 points in the fourth quarter after a back-and-forth affair in the first three frames. Freshman Ruthy Hebard had her 10th double-double of the season with 21 points and 12 rebounds. Freshman Sabrina Ionescu posted 22 points to go with five assists.
- Oregon shocked a sellout crowd in Seattle with a 70-69 win over No. 11 ranked Washington in the quarterfinals. Freshman Sabrina Ionescu hit two free throws with 6.4 seconds left to give the Ducks the one-point lead and Oregon forced a Kelsey Plum airball as time expired to secure the victory. Oregon was down by nine early in the fourth quarter but junior Lexi Bando scored 11 consecutive points for the Ducks to spark a 10-0 run that gave the UO a 66-64 lead. UW retook the lead, 69-66, but the Ducks held the high-scoring Huskies scoreless in the final three minutes.
- Oregon's run in the Pac-12 Tournament ended against No. 10 ranked Stanford, 71-56, in the semifinals. The Ducks stormed out of the gate, with a 25-16 lead at the end of the first quarter. But Stanford held Oregon to just nine points in the second quarter and led 36-34 at halftime. UO managed only 22 points in the second half. Sabrina Ionescu and sophomore Maite Cazorla each had a team-high 14 points.

FRESHMEN STARTING IN THE NCAA TOURNAMENT
Oregon starts three freshmen - G Sabrina Ionescu, F Ruthy Hebard and F Mallory McGwire - more than any other team in the NCAA tournament this year. Only Maryland, which starts both Destiny Slocum and Kaila Charles, has more than one freshman in the lineup. (Starter defined as having 20-or-more starts this season.)

FRESHMEN SCORING
In Oregon's Pac-12 Tournament opening win over Arizona, freshmen scored 61 of Oregon's 70 points. This season the Ducks are averaging  71.2 points per game overall and freshmen are scoring 45.1 points, 63.3% of the team's total.

PAC-12 AWARDS
- Freshman guard Sabrina Ionescu was named Pac-12 freshman of the year by both the league's coaches and the league's media. She was also selected to the all-Pac-12 and Pac-12 all-freshman teams.
- Freshman forward Ruthy Hebard was selected to both the all-Pac-12 and Pac-12 all-freshman teams.
- Junior guard Lexi Bando was named all-Pac-12 honorable mention. This is the first postseason honor in Bando's collegiate career.

FRESHMEN ON ALL-LEAGUE TEAMS
Oregon's Sabrina Ionescu and Ruthy Hebard became just the 17th and 18th freshmen in Pac-12 history to be named to the all-Pac-12 team. When looking around the nation, just two other freshmen were named to all-conference teams. In the Big Ten, Maryland's Destiny Slocum and Michigan's Kysre Gondrezick were both named all-freshman and second team all-conference. However, in the other power 5 conference - the SEC, ACC and Big 12 - no freshmen were selected to the all-league team.