Have you been thinking about joining the UO Fast Break Club so you can enjoy this exciting UO WBB season with other like minded Duck fans?  Now is a great time to do it!

The new Fast Break Club white, long-sleeved shirts will be sold to FBC members in the Founder's Club immediately after the Chalk Talk before the 11/22 game against Michigan.

There won't be a lot of time between the end of the Chalk Talk and the beginning of the game so join the FBC online (click here) now so you qualify to purchase the new t-shirts on Tuesday!

The shirts cost $20 each and are only sold to FBC members. There's a wide range of sizes too. Sales will be CASH ONLY.  You can buy more than one.

Okay, well let's see. After the 2011-2012 season ended, I had a challenging experience trying out for the Phoenix Mercury WNBA team. Throughout those few weeks I learned an immense amount about myself as a person and basketball player.

I spent the summer with my family in California and my partner's family in Kansas. In September 2012, I began competing with the club DUNAV 8806 in Bulgaria in the professional league there with Kristina Santiago from Cal Poly (whom played for Shandrika Lee from last year's staff). It was such an amazing experience getting to be immersed in a new culture, learn a new language and be able to live out my dream of playing professional basketball! And we won! We were the league champions and won the tournament at the end of the year!

I spent the summer of 2013 in California and Kansas again, before heading off to Switzerland for the 2013-2014 season. I was in the southern part of Switzerland, in the Ticino region, which was absolutely gorgeous. I lived about 5 minutes from the Italian border and took every opportunity to travel and indulge in the delicious food of the region. My team, Riva San Vitale, was successful in our league as well, holding second place throughout most of the season!

In the spring of this year, I decided it was time to hang up my sneakers and officially retire at the age of 24, haha.

I spent some time with family and friends again before returning to Eugene in June to finish my master's program in Couples and Family Therapy. Throughout the summer and fall terms, I completed the required coursework, saw clients as an intern, and began tutoring student-athletes at the Jacqua Center.

As of now, I can officially say I have my Master's of Science in Couples and Family Therapy and have accepted a position with Support Services for Student-Athletes that I will be starting right after the new year! I love being back in Eugene; being away was a wonderful experience but the community here is one of a kind. 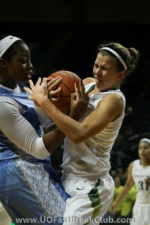 A quick recap on Sunday's game against 11th ranked North Carolina...  The final score may have been 76-59 but that doesn't tell the story of the Ducks being up 24-14 ten minutes into the first half.  The Ducks went to the locker room at half-time STILL ahead, but just by one point.  The Tar Heels came back in the second-half with all the answers and, despite some scrappy play by the Ducks, just kept stretching their lead.

Remember there will be a CHALK TALK before every home game from here on out.  They begin 50 minutes before game time and last only 15 minutes or so.  This is an excellent way for fans to tune up for the game! Everyone is invited, not just FBC members, so bring a friend or two!

Yes.  The UO Fast Break Club's halftime BINGO has begun!  Look for the bingo sellers out in the hallways.  They'll have on their green aprons and will be loaded with especially lucky cards.  Remember, sales of these bingo cards help the Fast Break Club to support the women's basketball program at UO.

FBC "TABLE" IN THE McARTHUR CLUB

In the time between the chalk talks and the games, the FBC will "set up shop" in the McArthur Club.  We'll be available to answer questions, chat, provide membership brochures, you name it.  We have a new table-top banner that fits nicely on the small round tables.  Look for us!

TICKETS TO THE JANUARY 9 UO-OSU GAME AT GILL COLISEUM

The Fast Break Club has purchased 22 reserved seating tickets behind the Oregon bench.  The actual tickets arrive sometime after Christmas.  These 22 tickets will be sold at cost ($11) to any FBC member first-come, first-serve.

It's a great time to join or renew your Fast Break Club membership to enjoy this great perk and sit with a great group of Duck fans behind the UO bench at Gill Coliseum in Corvallis on January 9!

Need to join or renew?  Find us in the McArthur Club before all home games or visit our FBC Membership webpage to see all the great FBC membership benefits and to print out a mail-in membership form.

If you're interested in the reserved seats behind the UO bench for the January 9 Civil War game in Corvallis you can email Jim Long (jlong@uoregon.edu).

HAVE YOU MET THE PLAYERS?

Meet the new crew and returning players in this video with scenes from the Fast Break Club's Annual BBQ for FBC members, the UO WBB team players and coaching staff plus a look at the first open scrimmage to see the team's new dynamics in action!

Just announced by UO media:  Junior forward Jillian Alleyne has been named one of 30 members to the preseason Wooden Award watch list, the organization announced Monday.

The Wooden Award is annually give to the top player in both men's and women's basketball.

The Fast Break Club is looking for a few good treadmill walkers to help raise money for cancer research.

The walking – or running if you prefer – doesn’t happen until Feb. 16-18 but there is a deadline of this Friday, Feb. 3, to sign up for turns on the treadmill.

The idea is to get folks to pledge donations based on the distance the walkers will cover during their 20-minute shifts.

The treadmills will be set up on the MKA concourse (before the game and at halftime) and courtside during the women’s basketball games Thursday, Feb. 16, and Saturday, Feb. 18.  You will have a great view of the game!

Sign-up sheets for treadmill shifts will be available at Thursday’s pre-game chalk talk. Anyone who wants to sign up but who won’t be at the chalk talk should contact FBC president Judy Brower at jujulein(at)comcast.net.

This Thursday’s chalk talk for UO Fast Break Club members will begin at 6:10 p.m. in the Founders Club just down the hall from McArthur Club.  Members should have received the details in their email today.

An assistant coach will give FBC members scouting information on Utah as well as points of emphasis in the game plan.

Have You Voted For AMANDA Yet Today?

Oregon fans have a chance to give Amanda Johnson the national recognition she deserves as a finalist for the Lowe’s Senior CLASS Award.
YOUR VOTE COUNTS!   AGAIN AND AGAIN!!!
VOTE EARLY ~ VOTE OFTEN

Come welcome the Women's Basketball Team for the first home game after being on the road! They deserve a nice warm welcome for the holidays.

Plus, UO Fast Break Club members get to meet with UO Coaching Staff for the second PRE-GAME Chalk Talk before Monday night's game with Cal State Northridge.  And scroll down further for info about getting your FREE TRADING CARDS, kid's activities and admission deals for all WBB fans.

Put your Duck Spirit on a poster and get your moment on the jumbo-tron with your own FAN SIGN!  The best sign each game wins a FREE TEAM SHIRT!

UO PRE-GAME CHALK TALK
An Oregon assistant coach will give FBC members scouting information on Illinois as well as points of emphasis in the game plan. The coach also will share a video and invite questions about the game.

The talk will begin at 6:10 p.m. in the Founders Club just down the hall from McArthur Club.  Members should enter through the parking garage or use the elevator or stairs at the Club entrance on the main concourse level.

Do you want to attend these very informative talks?  All you have to do is become a member of the Fast Break Club.  Check out the other perks of membership and get an application RIGHT HERE at www.UOfastbreakclub.com.
HAPPY HOLIDAYS!
Mon., Dec. 19
at 7: 00 PM
FREE Oregon women’s basketball trading cards will be given to the first 2,000 fans through the doors! General admission tickets will be available for $3, and pregame Gingerbread house making for all kids in attendance.

All kids ages 12 and under can purchase $3 general admission tickets. Bring your ticket from the Dec. 20 men’s basketball game against North Carolina Central, and receive free admission.
__________

Sign up as a fan on www.FACEBOOK.com/UOregonFastBreakClub to be the first to see the latest game photos of your favorite players!
Or subscribe to our website updates via email by CLICKING HERE (http://feedburner.google.com/fb/a/mailverify uri=UOfastbreakClub&amp;loc=en_US)
GO DUCKS!