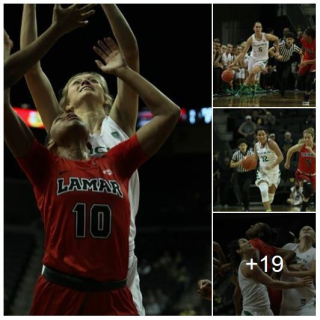 Visit our public Facebook photo gallery
to catch some of the best action
from Sunday's game against Lamar.

Want to know when we post new photos?  Click here to subscribe to our website and watch your inbox for an email verification to activate your subscription.  This will get you important photo updates and info about the UO Fast Break Club.

Check out the photos of the UO WBB 89-36 win over NCU on October 29th
at www.facebook.com/UOregonFastBreakClub! 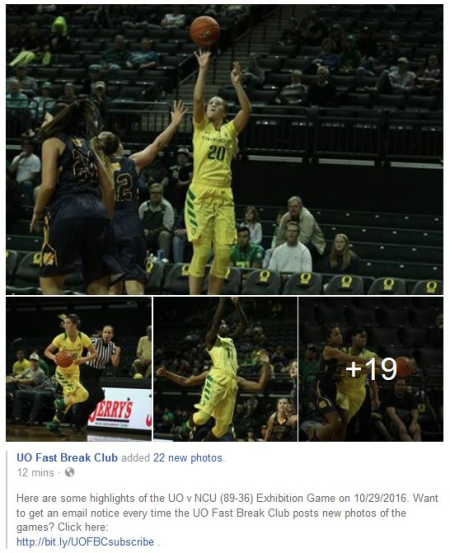 Be sure to subscribe to get email notices when new game photos are posted!

Photos to Remember the Highlights of the 2015-16 UO WBB Season! 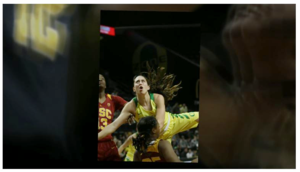 Click image to view video or enter
bit.ly/2015-16uoWBB in your browser.

Any way you cut it, this was a good year.  Some bumps and bruises, yes.  But a 24-11 season, just one win shy of a school single-season record is definitely a good year.

At the 2015-16 Banquet the tv monitors in the McArthur Club scrolled through image upon image of special plays and memorable moments.  While those weren't photos from the UO Fast Break Club, here is our collection of winning shots from the year.

Remember Maite Cazorla's cartwheel thanks to a USC player's foul? Remember Kat Cooper's accidental almost-headlock of a Long Beach State player under the basket?  Or the bench's reaction to the mix-up with the ref's when Katie Gruys went to throw the ball back in?

If you like what we've been sharing on the UOregonFastBreakClub Facebook page, consider becoming a member to support our efforts at supporting the UO WBB team.  To find out about the other great bonuses of being a Fast Break Club member CLICK HERE.

Three for Three! Ready for the Next Round of the WNIT! Now on to the Quarterfinals... 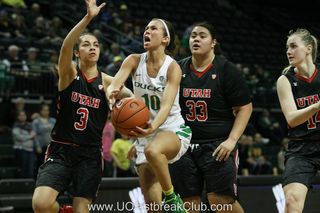 Even though the Utes came out blazing and we had a bit of trouble catching up, once we did the game went our way.  A big part of that was the 34 points that Lexi Bando put in the basket!

There's a chance the Quarterfinal game may be played in Eugene depending on whether TCU or UTEP win Thursday evening's Round 3 game in El Paso, Texas.  Stay tuned!

In the meantime, here are the links to the three WNIT game photo galleries:

Thank you to all of you who participated in voting for Jillian Alleyne for the Senior Class Award over the past month.  We hope you enjoyed the 'Daily Pix for a Daily Click' reminders to go vote.

As a thank you  we've wrapped up all our favorite 'SuperrJaay' photos into one action packed video, just click image below to bring up the video in a new window.  (Click full screen icon in the bottom right corner for the full effect!) The UConn-machine proved too much for us to overcome with Breanna Stewart and Moriah Jefferson hitting the vote gathering efforts with an immediate 22+% of the vote and we just didn't have the clicks to move the decimal point over enough for Jillian.

This is just the fan vote part of the Senior Class Award though so you never know!   The final award decision is based on four areas of achievement:  Community ~ Classroom ~ Character ~ Competition

"Fan votes will be combined with those of the media and Division I head coaches to determine the winners.  The Senior CLASS Award recipients will be announced during the 2016 NCAA Men’s Final Four® and NCAA Women’s Final Four®."

Whatever the results, thanks for taking a trip with us down memory lane of Jill's four years as Duck number one in record after record book.

We can't wait to see what you'll be up to next Jill!
You will have Duck-green fans where ever you go!