Last year, the UO Fast Break Club inaugurated its latest perk for members.  It was designed to be a thank you to all those who were members during the past season.

The BBQ Social made a big splash again this weekend with last year's FBC members getting the chance to meet the new UO WBB players, catch up with the veteran players, and meet most of the new coaching staff and their families.

The 'stars' of the afternoon ended up being the littlest Ducks thanks to the kids of Assistant Coaches Jodie Berry, Mark Campbell and our new Director of Operations, Stephenie Wheeler-Smith. 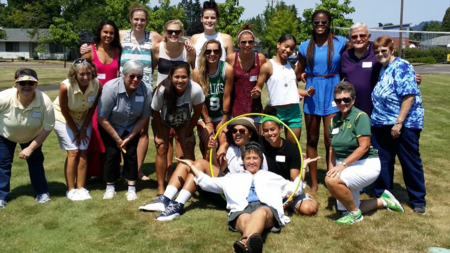 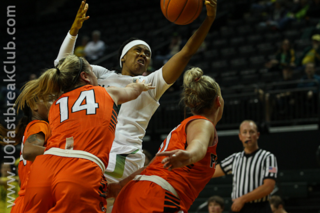 The Oregon women's basketball team will play host to rival Washington at 7 p.m. on Monday at Matthew Knight Arena in the second round of the WNIT and more records will fall!

LET'S GIVE THEM A GREAT HOME TEAM ADVANTAGE BY CREATING A LOUD CROWD AT MATT ARENA ON MONDAY!

Tickets and parking are available for purchase. 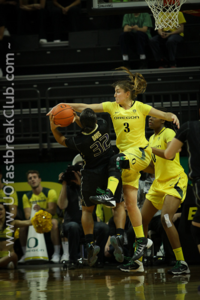 Per GoDucks.com... "A couple of major milestones could be reached on Monday night. Freshman guard Chrishae Rowe needs just 20 points to match the Oregon single-season scoring record of 693 points. Alleyne is also close, needing only 26 points.

"Alleyne also has a chance to become the fifth player in NCAA history to reach 500 rebounds in a single-season. The sophomore currently has a Pac-12 and Oregon record 494 rebounds and needs 45 more boards to match the NCAA single-season record."

The UO Fast Break Club is very proud of our UO WBB Team this season! 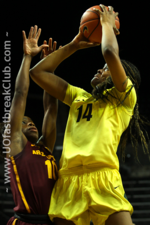 (To see the full GoDucks.com article with all the details CLICK HERE.) 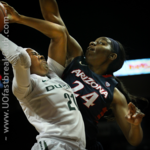 View the Photo Galleries of the
Arizona State and Arizona games...

The weather has jumbled schedules all around lately so we wanted to give you a reminder that today the Ducks will be playing UCLA at Matt Arena and game time is early -- 4:00 pm -- since it's the President's Day holiday. 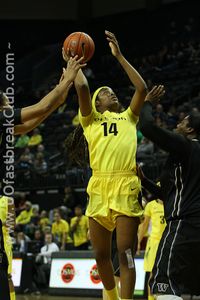 More records should fall at this evening's game with Jillian Alleyne's rebounding efforts.  Check out this GoDucks.com article for details!

The post-game Social for Fast Break Club members will be held right after the game in the Founder's Club.  The Seniors will be the special guests for this evening's gathering. 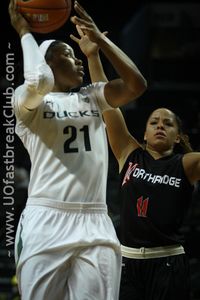 The UO Fast Break Club loves bringing you great action images of many of the home games as well as snapshots that capture the fun of the FBC Member's Socials with team players, their families and coaching staff.

< Freshman Chrishae Rowe in action.  Chrishae made 28 points in 29 minutes of play.  Another good reason she was just named Pac-12 Freshman of the Week for the fourth time this season.

CLICK HERE for Social Photos
Check out some of the players and their families who attended the Fast Break Club's December Social!

We heard from the Sophomores, Jillian Alleyne, Chloe Stiles, Janitah Iamaleava, and Katie Gruys this past month but with the rest of the team in the audience there was a good bit of teasing and chatter back and forth from the rest of the bunch!

Ariel Thomas (photo above right) got a good bit of ribbing about her swimming experience with the team's SEAL training program!  Still to come are Socials dedicated to the Juniors and Seniors.

CLICK HERE ~  Find out how you can attend the NEXT Post-game Social for Fast Break Club members is on January 26 after the noon game with the University of Washington.

It's not too late to join the Fast Break Club and get in on the FBC Socials for the rest of the season...
Download FBC_brochure for 2013-14 season

The Fast Break Club is proud to announce that the winner of the Signed Football Helmet is ticket #592 bought by Dustin Kalis, a devoted football fan from N. St. Paul, Minnesota. He and a friend flew out for the Utah game and bought a ticket while at the game.

See you there!  GO DUCKS!