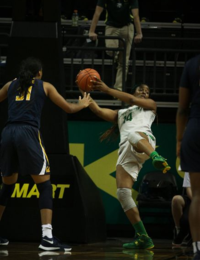 This may look like an everyday rebound for Jillian Alleyne but it's not.  This rebound under Cal's basket took extra effort from Jillian to pull in before she fell out of bounds.  Was the effort worth it?  Jillian always plays with 120% effort but this basket was especially worth it!

"POSTGAME NOTEBOOK: Jillian Alleyne now has 1,573 career rebounds as she passed Stanford’s Chiney Ogwumike to become the all-time leading rebounder in the Pac-12. Her double-double today is also No. 83 for her career and she is just two shy of tying Ogwumike’s conference record for career double-doubles … "  www.goducks.com

Not to be outdone, Lexi Peterson also nailed an important milestone! 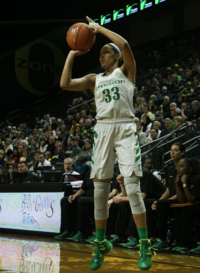 "Lexi Petersen scored 12 points, all of which came in the second half. She now has 1,005 career points and became the 27th player in program history to score 1,000 points … "  www.goducks.com

There was great action all around so check out more photos....

Another Win! Another Great Gallery of Game Action Photos!

The UO WBB team is one more game into a zero loss preseason!  When was the last time the UO WBB went 8-0 from the beginning of the season?  Post your answer in the comments section below! We have three more home games before we step into Pac-12 Conference season games. 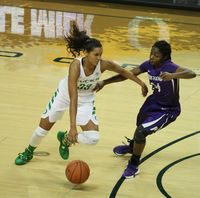 (And yes, @SuperrJaay got another double-double!)

Watching this team play such smart, intense, consistent and selfless basketball is a joy!  The chemistry they have together is something special.  Yes, the photos capture a lot of it, but it's nothing like being at the games!

See you at Matt Arena!

Game Photos Now Posted for the U Oregon vs Stanford (62-55) Game!

Oregon had a spectacular win against Stanford for the last game of Pac-12 Conference season breaking an 18 game losing streak against the Cardinal.

EUGENE – The Oregon women’s basketball team fell to the No. 11-ranked Oregon State Beavers 77-48 on Sunday night at Matthew Knight Arena in the 94th edition of the Civil War.

Oregon cut the lead to 25-12 thanks to back-to-back buckets from Alleyne along with one from Drea Toler with 3:53 left in the first half. The Ducks headed into the break trailing 33-16 after OSU finished the half on an 8-4 run. Oregon also trailed 33-16 at halftime in its Friday loss in Corvallis. UO got within 35-24 after Lexi Petersen drained a three from the left side early in the second half, but OSU’s Sydney Wiese answered right back with one of her own on the ensuing possession. Wiese’s three sparked another OSU run, this time 26-6, and pushed the Beaver lead to 61-30 with 10:01 left to play in the game. Oregon State went on to win 77-48 and sweep the series. 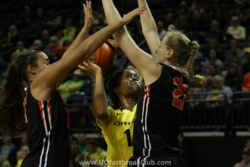 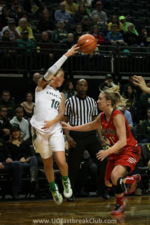 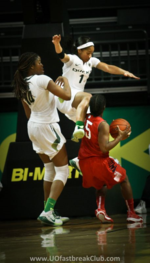 Drea Toler (1) is the team's shortest player at 5' 5" but her vertical jump is unbelievable!

Next game against SEATTLE U
is the last non-conference game of the season.
NOTE it's on a different day at a different time than usual....
MONDAY, DECEMBER 29 AT 4:00PM
See you there.