Amanda Johnson was drafted in the 3rd round by the Phoenix Mercury.    She becomes the sixth Oregon women's basketball player to be drafted by the WNBA.

How Many Alumni Do You Recognize?

Photos from the 2012 Women's Basketball Alumni Day at now posted.

We need your help!
Go to the Alumni photo gallery and see how many
names and year's you can enter into the comments for us!
TAG the people in the pix so they can find the photos and share them with their friends.
Got a favorite player in the group?
Post their photo to your Facebook Wall!

One more thing before you click away,
HAVE YOU VOTED FOR AMANDA YET TODAY???

Fan balloting counts for 1/3 of the total points towards the Lowe's Senior CLASS Award.
This is a national recognition for notable achievements in four areas of excellence –
community, classroom, character and competition.

Oregon fans have a chance to give Amanda Johnson the national recognition she deserves as a finalist for the Lowe’s Senior CLASS Award.

The 6-foot-2 forward has missed Oregon’s last 11 games with a left thumb fracture but entered her final year in a UO uniform as one of the most exceptional seniors on and off the court in the 2012 national class.

To read more about the award from GoDucks click here but the important thing is that FAN BALLOTING COUNTS FOR 1/3 OF THE TOTAL SCORE with the remaining 2/3 determined by NCAA Division I coaches and national media members.

To be eligible for the award, a student-athlete must be classified as an NCAA Division I senior and have notable achievements in four areas of excellence – community, classroom, character and competition.

We know Amanda deserves this and she is one of only two student-athletes from the Pac-12 Conference, the other being Stanford’s Nnemkadi Ogwumike, so...

You can download free promotional posters of Amanda Johnson for the Lowe's Senior CLASS Award!   http://www.seniorclassaward.com/athletes/text/amanda_johnson/

Print off as many copies as you want. 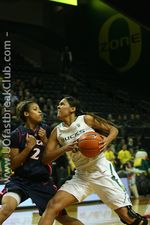 Ducks win 87-73.  The Ducks make 12 3-pointers in the win over Arizona.  Lexi Peterson who took over point guard duties in the second half was high-scorer with 17 points.

Others in double figures were Jasmine Holliday and Ariel Thomas with 16 points each, Jordan Loriel with 12 points, and Danielle Love with 11 points.

Others in double figures were Jordan Loera also with 17 points, Jamin Holliday and Deanna Weaver with 11 points, and Ariel Thomas with 10 points.